The Very Model of a Poster to CLPM

So, in 2002 I attended my first SPUG meeting. Also in attendance were Randal, Tim, J.P. (I think) and quite a few of the other usual suspects. The guest speaker was the inestimable Dr. Damian Conway. This night might be the single most important event in my career as a builder of the internets. I was already set in my ways regarding my operating system, and I knew enough perl to get by, but I wasn’t in touch with any users groups until then.

The crown jewel of the night was Damian’s recital in full of his poem, “I Am The Very Model of A Poster To CLPM” (sung to the tune of that song from Pirates of Penzance). I must admit that I’d never heard of CLPM and that it all sounded like gobble-de-gook at the time. If I recall correctly, this happened just after he took about 10 minutes to teach us all to pronounce the name of then-Pumpking, Jarkko Hietaniemi. This was the same year that the following video was made…

With that in mind, there’s one more thing I need to share with you before disclosing the lyrics. This piece was developed during a time when it was common for members of the perl community to flame one another on news feeds, take their anger and frustration out on newbies and generally be the bane of most of the internet. I like to think that it helped to shape me into a kinder, gentler perl programmer, debian user and general netizen over the years. I would also like to think that it will do the same for future members of our communities.

And so, without further ado, Damian Conway’s

I Am The Very Model of a Poster to CLPM

Now everything I need to know about the Perl community
I learned in kindergarten when I was a little lad of three
And in these next few minutes I’ll relate those five apothegm
For I am the very model of a poster to c.l.p.m.

The first truism I was ever taught upon my mother’s knee
Was that our dad’s a better dad than their’s could ever hope to be.
His name is Larry Wall, and that’s determinism nom’native
Since of the mural attributes he demonstrates proof positive.

He’s eight feet tall and ten feet wide; of granite-like solidity.
He wards us from the serpent’s tabs and coffee bean’s stupidity.
He guards us from that Gallic tower’s B&D urbanity,
And makes sure we don’t see sharp code that might cut loose our sanity.

He watches over each of us, like Odin of the Norse belief —
The stern All-Father figure and, at times, the comical relief.
So, if you vaunt our patriarch’s supreme linguistic acumen,
You are a model sychophantic poster to c.l.p.m.

The second tenet that I learned concerns, of course, the fairer sex
And why they are in short supply, while geek-boy JAPHs are multiplex.
As every schoolboy knows each conversation has single aim:
To raise one’s own significance, whilst razing others down in flame.

And thus good men and true who hold this principle as sacrosanct
Will all pursue beligerence as though they were from Mars. Or tanked.
It is the tenor of your newgroup posts that she from Venus flies:
Because most threads devolve into comparisons of…..meanness, guys.

When every post affronts their own collaborative sorority
It must exasperate them, for it renders the majority
Of female Perl geeks absent, till we’re forced to rename blonde Dutch men
To act as female models of a poster to c.l.p.m.

The third grand aphorism that was drummed into my youthful head
Was: if you can’t say something nice about someone, you should instead
Say every nasty thing you can impart, imagine, or invent
In any public forum that it happens you should both frequent.

This goes especially for the young, and new, and shy, and innocent.
To flame a newbie is a joy, t’will make you feel omnipotent.
To watch them squirm and bleat and bleed and scurry back into their hole,
The surge of ecstasy it brings is worth the way it eats your soul.

So never hesitate to turn the wrath of your vocabul’ry
Upon the hapless supplicant for Perl epistomology
And if you flame each FAQ, and every question that’s beneath you then
You’ll be the very model of curmudg’nly R.T.F.M.

The next point I should like to make’s the obverse of the previous
For while it’s true that to be newbie is a sin most grieveous
It ain’t as bad as being old and greyed and staid and tedious
And sitting at the keys all day dispensing thoughts invidious.

What right have you to tell me not to ask about my CGI???
I thought that Perl was all about website development, and I
Expect that you’d extend to me the simple human courtesy
Of dropping everything so you can do this homework now for me.

The Internet exists so I need never read the manual
And so my inane questioning can form a stream continual
While pleading for an email since I never read this group, as well
As posting them in jeopardy, in caps, and in HTML.

So if you are prepared to treat the Net as your god-given right
And suck the newsgroups dry like some goodwill-devouring parasite
And use them as a help-desk and a perldoc substitute, well then
You are the very model clueless poster to c.l.p.m.

The final precept that my pre-school inculcated in my head
Is one I would commend as antithetical to all I’ve said.
It is a noble concept that once used to garner more elan
The idea that, when I grow up…..I want to be a fireman.

The fire-fighter’s job’s to help, despite the inconvenience
And spare the inexperienced the cost of their own ignorance
And put out fires when the flames ignite the common living space
And through it all maintain an air of competence and skill and grace.

And this, my friends, I recommend to all of our community
That rather than a careless match or carefully lit incendiary
You spray out knowledge, patience, and a gentle stream of good advice
And save the newbies from themselves, and oldies from their prejudice.

And be yea more as Larry is, a fire-Wall against the threat
Of ignorance and arrogance, with both of which we’re still beset.
For if you choose to help your fellow JAPHs instead of scorching them,
You’ll be the next burnt offering we spit-roast on c.l.p.m. ;-) 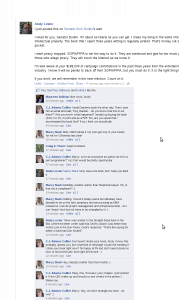