Running a console cable to the radio 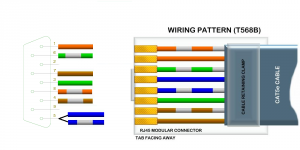 So, I’m attaching a radio to the chimney. I don’t want to have to bring it down every time I need to flash the firmware, so I’m also running an rs-232 cable up to it along with the PoE data/power cable. Since they don’t have anything pre-built, I wired one myself. I also made a png of the schematic I used. It is probably wrong. The rj-45 should probably have been flipped over, ‘cuz as it stands, I need to attach a null-modem converter and a rj-45 to db-9 converter I got from Sun from the last Try & Buy thing I did. It would probably be easier to wire up the rj-45 end as a second db-9 end. I’ll probably do that tonight. But this is the current state, and I’ve confirmed that it works just fine. The cat-5 is about 100’ in length, and I saw no loss of signal. YMMV.

[edit: you can also attach generators to your UPS this way]

2 Responses to Running a console cable to the radio